A Kiss to Melt Her Heart 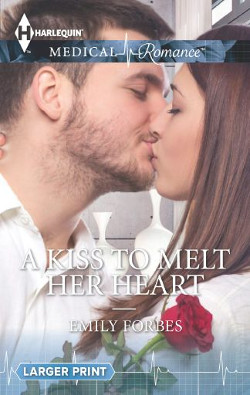 “A Kiss to Melt Her Heart”
Emily Forbes

Gabe tried not to watch as Sophie swung her legs out of the bed. He could see the swell of her breasts under the thin wool of her thermal top and he saw her nipples peak as her body registered the change in temperature.

He moved away but turning his back didn’t stop him from picturing the lines of her body, the softness of her skin, the touch of her fingers. He heard her feet hit the floor as she stood up and he imagined he could feel the air moving as she pulled on her clothes.

He opened the door as she finished putting her boots on and together they stepped outside. The sky glowed green and he heard her intake of breath as she looked up and stretched out a hand as if to touch the lights that danced above their heads. From one edge of the night sky to the other long fingers of light shimmered and glowed. The dark night sky had been overtaken by rich emerald green swirls tinged with sapphire blue and gold. Even the stars were dulled by the magnificence of the Aurora Australis.

Sophie turned in a circle to follow the lights as they danced across the sky. ‘It looks like the world has been turned upside down. I’ve seen these colours in the ocean but never in the sky.’ The colours were crisp and clear, translucent, and she lifted her hand again as if to reach out to touch them. ‘They are so beautiful.’

The lights shone like phosphorescence, splitting the darkness like laser beams. A curtain of coloured smoke wafting across the sky.

‘Do you want to get your camera?’

She shook her head. ‘No. I don’t think I could do it justice. I just want to sit and enjoy it.’

Gabe could feel the length of her thigh against his and he imagined he could feel her body heat even through the thick insulated suits. Indecent thoughts had been running through his head ever since he had enticed her out of bed and now that she was practically sitting in his lap his thoughts were getting more and more r-rated. Despite the fact they were both bundled up in myriad layers of clothing he could picture her shape and he could see her face under the emerald glow of the Southern Lights and that was enough to keep his blood boiling.

She had left her hair loose and the dark curls were poking out from beneath her beanie, spilling over the front of her red suit like a chocolate fountain. He resisted the urge to reach out and lift the weight of her hair in his hands.

Sophie gazed heavenward as the display continued in all its spectacular glory. ‘I can see how being here could become addictive. There’s nowhere else quite like it, is there?’

‘No, it’s hard to give up,’ he agreed. He missed the Ice whenever he left for a break. He was attracted to the wildness and the freedom of Antarctica. It really was the last frontier. Of course there were rules, particularly in terms of safety, but the expeditioners were a little community at the bottom of the Earth, remote and separate from the rest of the world, and that was one of the things he relished.

‘I had the impression that Antarctica was red, white and blue, but now I’ll remember it as emerald and gold,’ she said and he felt her leg twitch as she shivered.

Gabe stood up and reached for her hand. ‘Time to get warm,’ he said as he pulled her to her feet.

They were standing almost chest to chest and Sophie tipped her head back to look up at him. She wasn’t here to forget but to move on. She wanted to make a new start. She wanted new memories and sitting under the Southern Lights drinking hot chocolate was exactly the type of new memory she wanted. She would never see this anywhere else and now, whenever she thought of the Southern Lights, she would associate them with Gabe. Tonight would be a perfect memory. ‘Thank you,’ she said. ‘It’s been a perfect day.’

Gabe’s eyes were dark. He wasn’t smiling but he was watching her so intensely that she could feel a yearning in her belly as though a fire was being stoked. She leant towards him as if she was the aurora and he was the South Pole. She was powerless to resist the pull of attraction. She put her hands on his chest and even through his thick jacket she could feel his strength. He felt solid and dependable and masculine.

She felt his arms wrap around her as he pulled her in even closer. He bent his head.

Her name was a whisper on his lips.

It was the first time in weeks she had been called anything other than ‘Doc’ and she liked how her name sounded when he said it. It made her heart sing.

And then the whisper was gone as his lips covered hers.

His beard was rough against her cheek but the contrast between the scratchiness of his beard and the softness of his lips was incredible. Her breath escaped in a sigh as she closed her eyes and opened her mouth to him.

He tasted of cinnamon and chocolate and she knew she would always associate those flavours with Gabe. It was amazing to kiss someone when the only thing you could feel was their mouth. Her hands were on his chest but because of all their layers the only exposed parts of them were their noses and lips. It concentrated her senses and sharpened her focus. Everything she could touch and feel was going into the kiss. Everything she could touch and feel was happening through her lips.

She melted into him, unable to tell where she stopped and he started. This was the kiss she’d been dreaming of but it was better than she’d imagined. Gabe’s lips were soft but his tongue was searching and as he explored her mouth a rush of heat shot from her chest to her belly and all the way to her toes. It was intense, powerful and all-consuming. It was an incredible feeling but did that make it right?

Sophie wasn’t sure. She pulled away, pushing her hands against his chest until their lips came apart.

Sophie lay her in bunk underneath Gabe trying to breathe quietly. Trying to sleep. But it was going to be impossible. Her mind kept replaying that kiss.

She expected to feel guilty but there was no denying she had wanted to kiss him. That she’d wanted to for days. It wasn’t wrong and she wasn’t going to feel guilty about something that felt so right. She was done feeling guilty.

Sitting under that magical sky had made her feel small and insignificant. It had put things into perspective for her and reminded her that they are all temporary. The lights would be there long after she and everyone else she knew had gone. The lights would bathe the world in their colours for eternity but she only had the here and now. She only had one chance at life and she needed to live it.

Life was short. She needed to be brave. She wanted to be fearless. She needed to take a chance and live each moment. She didn’t know how many she had left and she didn’t want to waste any of them.

He’d said it was her decision.

She wanted to live her life without regrets.

It was her decision and she was willing to take a chance.

She tugged her necklace over her head. She stuffed the chain and her wedding rings into the pocket of her fleece and whispered to Gabe. ‘Are you awake?’