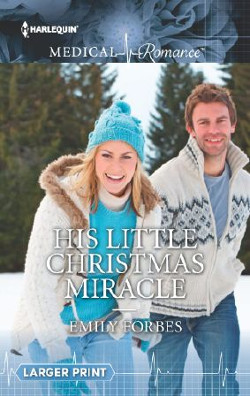 Jess had refused to wear a dress. As if that meant she had some control over the situation. She didn’t want to feel like she was going on a date. They were just two old acquaintances catching up. She tucked her jeans into her boots and tugged a black turtleneck sweater over her head. She did put on make-up, she was too vain not to, but kept it simple. Foundation, mascara, some blush and lip gloss. She still wanted to look pretty but not desperate. Adding a red scarf for some colour, she headed out the door.

She’d insisted on meeting Lucas at the hotel. This wasn’t a date so he didn’t need to collect her, she was quite capable of walking a few streets. She stepped from the plaza into the lodge. She stopped briefly, gathering her thoughts as she admired the room. There were two beautifully decorated Christmas trees in the lobby, one at each end, and the lobby itself was festooned with lights, pine branches, red bows and mistletoe.

The lodge was celebrating Christmas in style and decorations were multiplying in the village too. The Christmas spirit was alive and flourishing in Moose River and Jess smiled to herself. As a child she had loved Christmas. She had looked forward to it all year, partly because the festive season also included her birthday, but it had been her favourite time of year for so many reasons. But then, one year, Christmas had lost its sparkle and Jess was desperate to put it back. Maybe this would be the year.

Jess felt someone watching her and she knew it was Lucas. She turned her head. He was walking towards her, coming to meet her in the lobby. He was wearing a navy suit with a crisp white shirt and a tie the colour of forget-me-nots. She’d never seen him in a suit before. His hair had been brushed, it wasn’t as tousled as she was used to, and she fought the urge to run her fingers through it and mess it up a bit. He looked handsome but she preferred him more casually styled. But perhaps the old Lucas wouldn’t have fitted into this fancy hotel. She wondered how much he’d changed. Probably not as much as she had.

He smiled at her. A dimple appeared in his cheek, a sparkle in his eye. Now he looked like the Lucas she’d fallen in love with.

He reached out and took both her hands in his then leaned down and kissed her cheek, enveloping her in his clean, fresh scent. The caress of his lips sent tingles through her as her body responded to his touch. She could feel every beat of her heart and every whisper of air that brushed past her face as his lips left their imprint on her skin. Despite what she thought, her body didn’t seem to remember that this wasn’t a date or that seven years had passed. Her body reacted as if it had been yesterday that Lucas had been in her bed.

She’d been on a few dates over the past few years but she’d eventually given up because no one else had ever had the same effect on her as Lucas had. The attraction she’d felt for Lucas had been immediate, powerful and irresistible, and she’d never felt the same connection with anyone else. Not one other man had ever made her feel like she might melt with desire. Not one of them had made her feel like she was the centre of the universe, a universe that might explode at any moment. What was the point in dating? she’d asked herself. Why waste time and energy on someone who wasn’t Lucas? If she couldn’t have Lucas she’d rather have nothing.

And it seemed he hadn’t lost the ability to make her feel truly alive. Just a touch, a glance, a kiss could set her off. She’d need to be careful. She’d need to keep her wits about her and remember what was at stake.

‘JJ,’ he said, and his voice washed over her, soft and deep and intimate. How could she feel so much when so little was said? ‘Thank you for coming.’

As if she’d had a choice.

Despite her show of determination she’d known her resolve wasn’t strong enough to withstand the temptation of knowing that Lucas was only a few streets away. She’d known she’d pick up the phone and call him.

‘I hope you don’t mind if we stay in the hotel to eat?’ he asked.

‘I’m not dressed to eat here,’ she said, as she took her hands out of his hold and shrugged out of her coat. Jeans and an old sweater were not five-star dining attire, even if the jeans hugged her curves and the black top made her blonde hair shine like white gold.

He ran his eyes over her and Jess could feel her temperature rise by a degree for every second she spent under his gaze. She could see the appreciation in his eyes and the attention felt good.

‘You look lovely,’ he said as he took her coat. It had been a long time since she’d wanted to capture a man’s interest and despite telling herself this wasn’t a date it was nice to know that Lucas liked what he could see. ‘And you’re safe with me. I can put in a good word for you if need be.’ He was laughing at her and she relaxed. His words reminded her of their first night together all those years ago. She’d felt safe then and she felt safe now.

‘Are you sure? I don’t want to drag down the standards.’

‘Believe me, you’re not lowering our standards.’ He ran his gaze over her again and Jess’s breath caught in her throat as she saw his forget-me-not-blue eyes darken.

He guided her into the restaurant, his hand rested against the small of her back. His touch was so light she should hardly have felt it but she could swear she could feel each individual fingertip and her skin was on fire under the thin wool of her sweater. He took her to a table positioned beside the large picture windows looking out over the outdoor terrace and onto the plaza. Lucas pulled out her chair for her and reached for a bottle of champagne that was chilling in a bucket next to her. He popped the cork and poured them each a glass.

‘To old friends,’ she said, as they touched glasses.

She took a nervous sip of her champagne and looked out of the window. Christmas lights were strung up around the terrace and stretched across to the plaza. They surrounded the ice-skating rink and looped through the bare branches of the trees. The ice and snow sparkled under the glow of the lights as skaters glided around the rink. It was the perfect image of a winter wonderland.

‘It’s perfect. Just looking at it makes me happy. Someone has done a very good job.’ The entire lodge conspired to make her feel as though the hotel was giving her a warm hug. Or maybe that was Lucas.

Lucas nodded. ‘This is my vision.’

‘Really? I thought you were the hotel manager.’

‘That’s my official title but this is my hotel.’

‘You told me you wanted to work in the hospitality industry when you finished university, you never said you actually wanted to own a hotel.’

I remember everything about you, she thought, but she said nothing.

‘I have you to thank for that,’ he told her.

‘I started planning this the day you vanished from my life.’

‘I didn’t vanish,’ she objected. ‘My father dragged me away. I didn’t have a choice.’

‘In my mind you vanished. I never saw you again. I looked for you, every day, until the end of the season, until the day I left, but you had disappeared.’

‘You looked for me?’ She’d never dared to imagine that he would have thought about her.

‘Of course. Did you think I would just let you go? It’s taken much longer than I thought it would to find you but now we have a chance to fill in all the gaps. Now I have a chance to find what really happened that day. To find out what’s happened since.’

‘I’m not the same person I was then, Lucas.’

She remembered that awful day as if it were yesterday. The shame. The heartbreak. She had felt as though things could never be worse. Until she’d found out that, really, they could. In fact, they could be a lot worse.

Everything had changed after that, including her. The only thing that hadn’t changed, apparently, over the past seven years was how Lucas affected her. As his eyes locked onto hers she knew she would jump right back into bed with him tonight if he asked. She could feel every cell in her body yearning for him. She felt as though if she didn’t keep tight control of her emotions her body would dissolve. The heat between them was enough to melt her core and she could feel herself burning.

She could get lost in him so easily and she couldn’t let that happen. She needed to resist him, needed to keep her distance, but when he looked at her like he was doing now, like she was the only person in the world, she didn’t think she had the willpower to stay away. Sitting there, looking in to his blue eyes, she could pretend that her life was still simple and easy and privileged.

But that wasn’t the truth.

She fought the urge to give in to him. To do so would mean telling him all her secrets. She knew that it was inevitable but she was terrified of what he would think when he found out. Would he forgive her? Would he reject her?

She suspected it would be impossible to get out of this with her heart intact and she wasn’t sure if she could stand to lose him a second time. But that wasn’t going to be her choice to make.

She picked up her glass as it gave her a chance to remove her hand from his, which was the only thing to do if she wanted to think straight. There were things she needed to tell him.

Jess sipped her champagne, steadying the glass on her lip to disguise the shake in her hand. All the times she’d wished he’d been with her and now here he was. It was time for the truth. She couldn’t keep her secret any longer. She took a deep breath and put her glass down on the table. Starting the tale would be difficult but she feared it wouldn’t be the worst part.

‘Lucas, there’s something I need to tell you.’